Will You be made to pay for Georgia Power's mistakes at their years late huge cost overruns Vogtle Venture?

...And pay a profit to them on their mistakes?

No Overrun Profit In Georgia

On the horizon is a big financial and political decision with YOUR ELECTRIC BILL MONEY at stake.

At the Georgia Public Service Commission, Georgia Power is working to make you pay for their construction mistakes, re-do work, mismanagement, and delays at reactor Vogtle Venture.

and they aim for you to PAY THEM A PROFIT ON THEIR MISTAKES !

2,300,000 Georgia Power customers in 155 counties are being set-up to pay for Georgia Power's many mistakes at their Vogtle Venture...are you one of them?
[Customers have already paid about
$4,000,000,000 for nothing except higher electric prices]

Do you have a small business that is being set up to pay for their mistakes?

The present Georgia Public Service Commission WILL NOT PROTECT US from paying for the mistakes, overrun costs, and work re-dos at Vogtle Venture 3&4 ...and from...
paying a profit on the mistakes !

No Overrun Profits In Georgia

The Vogtle reactor venture costs are $Billions over the original 2009 $14Billion bait.

The way things have so far been with Vogtle at the Public Service Commission, customers will pay for mistakes, and if things follow precedent, Georgia Power will get to profit on their mistakes!

"NoPig" utility law reform will protect us from paying billions in overrun costs.

The PSC Commissioners have consistently ignored the PSC professional staff and have NEVER PROTECTED Georgians from paying for the Vogtle Venture.  They can't be trusted...so A "NoPig" Law IS NEEDED.

In 2009 Georgia Power got an unusual utility law passed that let them take money from customers by surcharges to finance construction of their 14 billion dollar atomic plant venture. GaPo claimed that lower price electricity would be a return for the (now billlions) money taken from customers. (Note: even the surcharges were unfairly distributed by the Georgia Public Service Commission in that the very largest industrial customers got a big pass on paying)

NOW The only way to protect Georgians is for the Georgia Legislature to update and amend utility law so:

1. NO PROFIT IS ALLOWED to Georgia Power on Vogtle 3&4 cost overruns past their $6.1 Billion or 47% share of the original $14 billion dollar cost as they proposed to the 2009 legislature.

2. The Georgia Public Service Commission is directed to allow into the profit-making rate base no more than $6.1 billion dollars in Georgia Power Vogtle construction costs (their 47% ownership of the Vogtle venture) as they proposed to the 2009 legislature.

Note and remember:  In 2009 Georgia Power got their free finance money CWIP surcharge law based on proposed future lower cost electricity. After the typical household paying out around $900.00 in surcharges and small businesses far more, lower cost electricity benefit IS NOT EVER HAPPENING.  Now the 2023 legislature needs to PROTECT CUSTOMERS with NoPig.

No Overrun Profit In Georgia

Was it a Low-Ball Bait-and-Switch on the 2009 Legislature?

Let us take money from customers now to finance the Vogtle Venture, and customers will benefit later with lower cost electricity.

Their law deal allowed them to collect so far nearly $1,000 from the typical customer household, without compensation. The law allowed collecting a surcharge from customers, for Construction Work In Progress "CWIP."

Georgia Power's proposed deal to the 2009 Georgia legislature was that the reactors 3&4 would cost $14 billion dollars and be complete in 2017. Georgia Power's part was 47% of that. As part of the deal, Georgia Power could collect about $4 billion up-front from customers with the deal that lower electric rates from Vogtle would then return a $4 billion value back to customers.

Their law "deal" is broken. The reactors are costing double what was proposed, and electric rates have already gone up due to overrun costs and the PSC allowing costs to go up for the Vogtle venture.

The 2023 Georgia Legislature can recognize the broken deal and remedy the situation by protecting 2.3 million customers from paying for Georgia Power's costs above the original 6.1 billion proposed in the deal to get the CWIP money.

The company has not kept their part. We customers have and paid billions in CWIP. WE SHOULD NOT PAY FOR THEIR OVERRUNS.

NoPig calls for a customer's special interest law that will PROTECT customers.

References, a few of many

One new report says the company has MISLED the Georgia Public Service Commission:

January 20:  Stating that Georgia Power has misled the Public Service Commission and the PSC Staff, The Institute for Energy Economics and Financial Analysis has the most recent damning analysis.

December 18:  A Stunning Comprehensive Report, Ratepayer Robbery, by the Georgia Conservation Voters Education Fund on the many serious problems, malfeasance, missteps, corporate greed, and incompetence in the Vogtle situation.

Dec 16 at the Public Service Commission:

In the News:  More Vogtle Wire Woes Could Add to Delay  .

SUMMARY:  ATLANTA (AP) — ... Testimony filed Wednesday with the Georgia Public Service Commission by engineer Don Grace and others predict that the third reactor at Plant Vogtle near Augusta won’t meet the most recent range of July 2022 to September 2022 set by Georgia Power Co. ... problems are “largely attributable” to electrical wiring problems ... “We have testified in many prior (proceedings) that the schedules provided by the company are not achievable.”... Grace said company estimates have “repeatedly been demonstrated to be unrealistic and unreliable.” ... the company will need longer than the four months that it projects to load nuclear fuel and complete testing, ... the company is submitting many fewer notices to the Nuclear Regulatory Commission than planned showing work has been completed and tested. ... Grace also warned that construction performance on Vogtle’s fourth nuclear reactor is not improving, ... Georgia Power said for years that Unit 3 would be in commercial operation by November 2021, but has pushed back that deadline three times since May.

At the November 15 PSC hearing, the company said there were approximately 600 "electrical" problems to be fixed.

Most of the problems were spacing issues that shouldn't have happened if the work crews had an engineering and quality control supervisor. 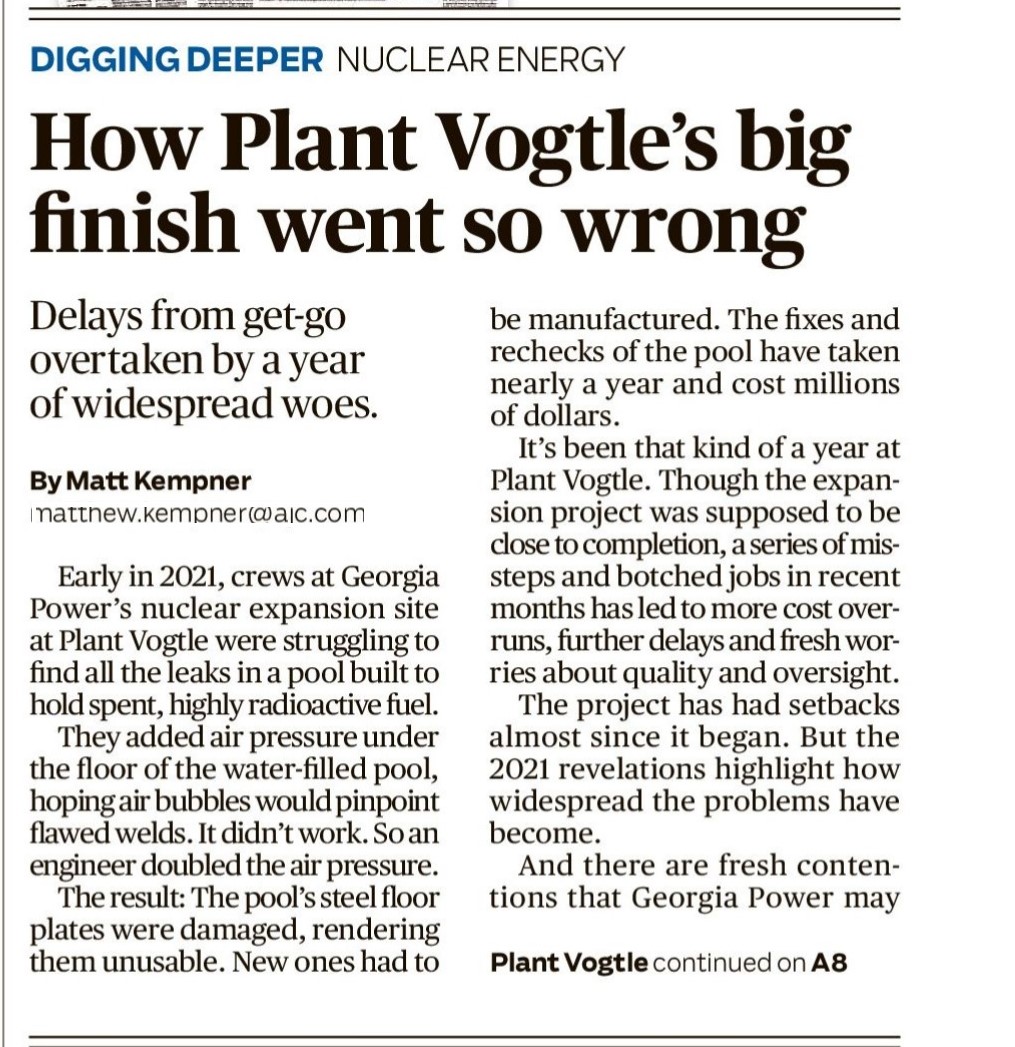 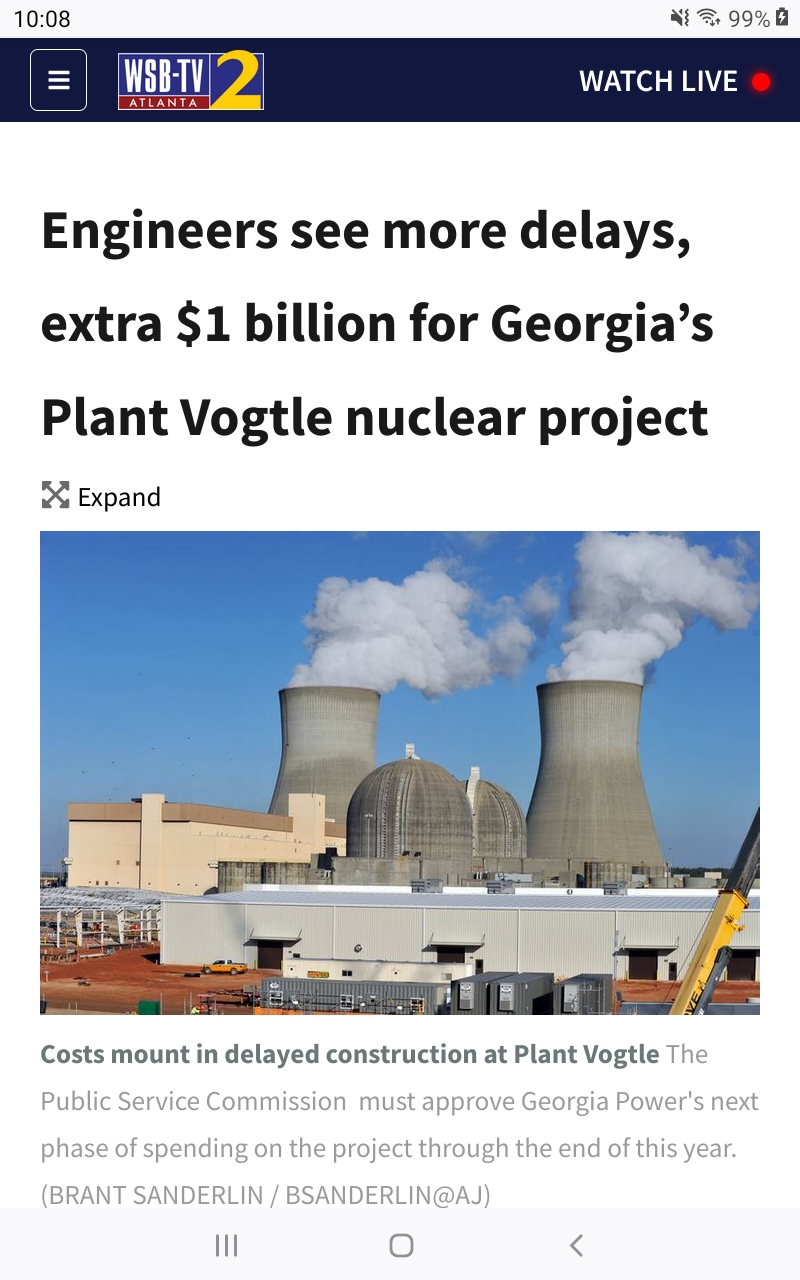 Clark Howard summary about the surcharge. From October 2018. This is an excellent overview:
https://gcvoters.org/youre-paying-for-plant-vogtle-
even-though-youre-years-away-from-benefiting-from-it/

This area still under construction, as is Vogtle Venture. NoPig isn't years late...and $ Billions over. 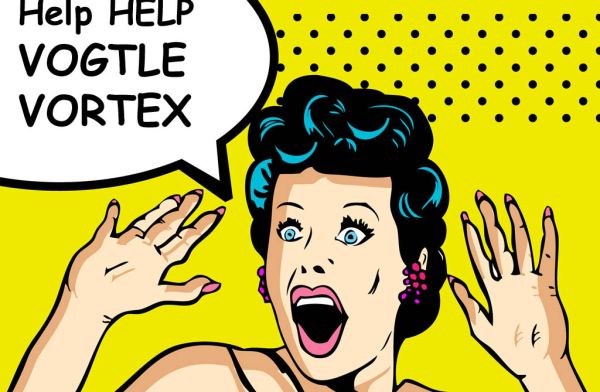 Call or e-mail your Representative and Senator at the Georgia Legislature. Let them know you WANT THE COMPANY OWNERS TO PAY FOR THEIR MISTAKES, NOT YOU, AND NO PROFIT ON COST OVERRUNS ! 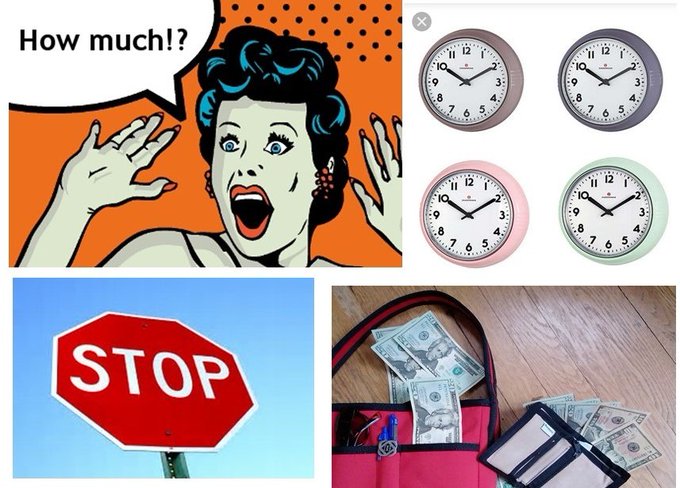